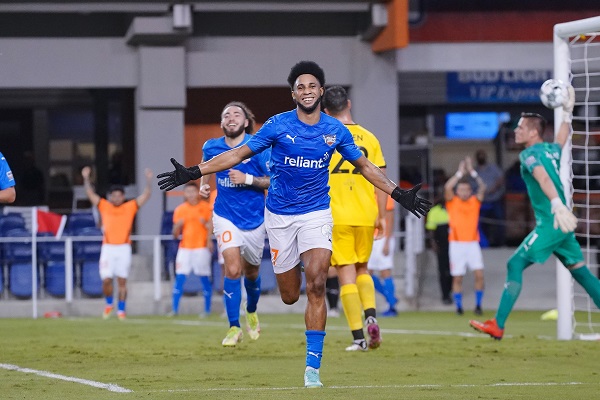 After a 2-0 win vs. New Mexico United, RGVFC are still in playoff contention entering the final week of the USL Championship regular season with two matches left.

A loss on Saturday night for RGVFC would have ended their playoff chances. But, as they faced one of the clubs battling for the final Mountain Division playoff position, the Toros performed well in their biggest match of the season and took all three crucial points.

They outshot New Mexico United by an 18-5 margin (6-1 on target) and held the edge in possession. Both of the goals for the hosts came in the second half at H-E-B Park.

First, Christian Sorto played a nice ball towards Rodrigo Lopez (through a perfectly-executed dummy by Jonas Fjeldberg) and the veteran buried his chance. Just about ten minutes later, Juan Carlos Azocar’s cross was headed down by Sorto to Kyle Edwards in front of goal. The RGVFC striker tapped the ball home to give his side a 2-0 lead.

For the first time since 2016, the Toros are truly in the playoff hunt in the final week of the season. Wilmer Cabrera’s side seemed to be a lock for postseason play early in the season, but a lengthy winless run saw that likelihood dwindle. Now, RGVFC is fighting for their first postseason berth since their inaugural season.

Austin Bold FC, 5th place with 41 points, are winless in their last five matches and face Charlotte Independence, an Eastern Conference playoff side, in Texas this weekend. (Maximum points: 44)

RGVFC, 6th place with 41 points, are the only one of these clubs with two matches left as they take on Real Monarchs SLC tonight and El Paso Locomotive FC on Saturday. Simply put, with two wins, they are in. (Maximum points: 47)

Christian Sorto: A sparkplug for the attack at various times this season, the USL Championship Team of the Week performer came up huge vs. New Mexico with both assists, four chances created along with four shots and 86.7% passing accuracy.

Baboucarr Njie: Playing his part in the clean sheet on the backline, he completed 49 passes (81.7% accuracy) and tallied three interceptions and two tackles.

The Real Salt Lake affiliate’s postseason aspirations have been gone for some time now in 2021. They have the fewest goals scored (26) in the USL Championship and are tied for the eighth-most goals conceded (50) and tied for fourth-fewest clean sheets (4). But, the last-place club in the Mountain Division have recently pieced together a decent run of results.

In their last three matches, they are unbeaten with two draws vs. Colorado Springs Switchbacks FC and a 4-3 win over Austin Bold FC. The latest draw with Switchbacks FC came last Friday and Monarchs SLC played almost the entire match with just ten men after an early red card.

Kyle Adams: He scored the lone goal in a 1-1 draw last time out for Monarchs SLC. The former RGVFC captain continues to lead the club in passes, clearances, interceptions, blocks, and aerial duels won.

Malik Johnson: The winger has a club-high 33 chances created and has registered three assists on the year.

Milan Iloski: He leads the team with five goals and is tied for the most assists with three.

Having clinched the top spot in the Mountain Division weeks ago, Locomotive FC are looking to keep their momentum going entering the postseason. They’ve done exactly that after a surprise blowout loss vs. LA Galaxy II with two wins last week by a combined 7-0 margin.

El Paso remain one of the best defensive clubs in the league, second in clean sheets (13) and tied for second in fewest goals conceded (30). The Toros have faced El Paso three times this season, losing twice (1-0 on 5/22 and 3-1 on 8/21) and winning once (3-2 on 6/30). A big boost for RGVFC in this matchup is the location of the match being at H-E-B Park because El Paso is unbeaten at home this season.

Logan Ketterer: One of the league’s best goalkeepers, Ketterer has nine clean sheets and just 27 goals conceded in 26 appearances.

Josue Aaron Gomez: He is up to ten goals and five assists this season after three goals and two assists last week, earning him a Team of the Week honor.