Which clubs impressed in Breakin’ USL League One: Week 4 Boogaloo?

USL League One’s fourth week is now in the books and even though it contained the fewest games so far this season. We saw the third 3-2 game and plenty of other fancy footwork. With players starting to feel the team rhythm, this breakdown will show why the new teams are finally finding their groove and are dancing up the table.

The origin of the name for the dance made in the 1700s isn’t known but has been rumored to derive from the Spanish word flama, meaning “fire” or “flame.” Forward Madison, who started the season goalless after two games, needed someone to provide the flame they were looking for, and that man was Josiel Núñez.

The Panamanian international showcased some fantastic touches and his ability to put bend on the ball, providing a spark in the midfield and creating chances that the team has lacked. When you look at the heat map next to the average position, it’s pretty obvious who was the pivot of Forward’s offense and how they found success in the 2nd half (#70) (Right to left). Their first two games the offense focused on getting the ball down the side and switching the ball or sending in crosses. It should also be noted, Josiel’s success also relied heavily on my Underrated Player of the  Week, Eric Leonard. In the minutes before the first goal, he had four breakups in the midfield of OCB’s attack. These were important minutes that slowed down the game against Orlando who had completely dominated possession to that point. 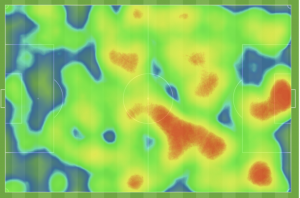 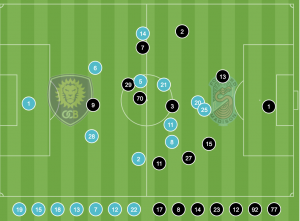 Defensively, Forward did what they do best and cleared the ball. Connor Tobin led the way with four bringing him to a league-high of 22 clearances on the season. Orlando looked extremely dangerous and had 59% of possession. They out-passed, out-crossed, and out-hustled Forward in the 1st half and part of the 2nd as well.  However, once Madison scored their first goal, you could see the momentum change and the confidence of the Mingos in full effect. It was as if a weight was finally lifted off their shoulders relieving all that pressure. Setting up the last 20 minutes of beautiful soccer for Forward. (Except for Don (Not) Smart’s two yellow cards in one minute, leaving Madison to play down a man in the final minutes.)

Forward would take the 2-1 victory for their first win of the season. Orlando likely still has some tricks up their sleeves with 16-year-old Grantiur causing headaches all day including a PK he drew when Forward’s Tobin tripped into him after struggling to keep up. Grantiur also bullied a Mingo in the 52nd minute as he took the ball away like the biggest kid in the schoolyard.

Simas made great overlapping runs and showed he is one of the fastest players in the league. He also turned in an impressive defensive effort with two interceptions, two tackles, one clearance, and seven duels won. Matheus Silva also proved to be a physical presence with three tackles, two clearances, and ten duels won. I mean, have you seen him? Yes, OCB has given up the most goals in the league and yes, OCB has the 3rd worst passing in the final 3rd, but I wouldn’t pencil in an easy win against them on your schedule quite yet.

If the Chattanooga Red Wolves only took one dance direction from the Cha Cha slide in the 1st half, it was definitely “slide to the right.” Whether it was from tape study or because of the injury to Joshua Phelps which kept him out the game, Coach Hankinson went into the game with a plan and executed it. How well? Three goals in 17 minutes well. Jonathan Caparelli and Richard Dixon were the perfect dance partners as they overloaded the sides and caused havoc for the league’s best defense. Their passing overall wasn’t the best in their opponent’s end but when they did string a series of passes together, they made the most of it and scored three goals on nine shots. With Caparelli’s two chances that lead to goals, Chattanooga couldn’t have asked for a better start and he was the important player that provided it. But as a team who is learning to dance for the first year, their feet got tangled up in the 2nd half.

If Chattanooga took one dance direction from the Cha Cha Slide in the 2nd half, it was definitely the “freeze” part. Tormenta FC dominated possession and started to gel a lot better in the midfield thanks to the space they were given. With the Red Wolves losing 64% of their duels in the 2nd half, Tormenta took advantage of space and had the ball a lot more in the final third. With a beautiful one-touch three pass goal to Hellman and an uncontested curler from the league assist leader Conner Antley, Tormenta found themselves in reach of a great comeback but fell short.

The highest scoring game since Week One was a fun one, but it was also one I wouldn’t make rash decisions about either team because of it. On the Tormenta end, missing two of your three best defensive players provided to be a huge issue for a team that hasn’t really had a full-strength team all season. Once everyone is back and healthy, I expect Tormenta to be in the form that they’ve shown before. On the Red Wolves end, I think the major thing they’ve lacked all year finally come to fruition as they were clinical finishers of chances they created. However, their defense which had been stout the past 2 weeks showed weakness. Ualefi was Chattanooga’s only player who had more duels won than lost (8 won-lost 4) and when the team is losing 40 duels, it’s hard to keep any lead. Thankfully, Mangels made solid saves to keep them in the game, as he’s done for a good part of the season.

I’m sure a lot of Richmond fans went into the game a little worried about their attack against Greenville’s organized defense, but it was actually Richmond’s defense which would help them join Forward Madison for their first win of the season.

Greenville continued their crowding down the side’s attack and did it extremely well. A team who must have been energized by Good Friday because they had TWENTY-EIGHT crosses! Polak, Bermudez, and Politz all had four crosses each to help their team keep Richmond on its heels for most of the game. The only issue is, only one of them had any successful crosses. In fact, out of the 28 crosses the Triumph sent in, only three in total were successful. So how did Richmond take advantage of it? 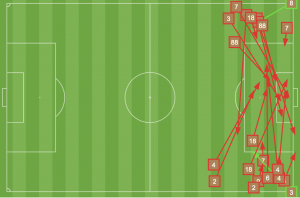 Greenville had four shots on target but the most important save happened in the 6th minute when Akira Fitzgerald pulled a contender for Save of the Year. Had Greenville scored it, the game would have been completely different as Richmond would have to chase the goal and try to break through an already disciplined Triumph defense. But because of Fitzgerald’s heroics, Richmond showed their moves and had the defense spinning circles. Matthew Bolduc was the heart of the Richmond attack who had found himself on the left side in between Boland and Cole Seiler. With Politz making overlapping runs and somehow switching to the other side of the field, Bolduc found a nice open space where he was able to create chances for Richmond and allow space on the right side after drawing people in on the left. This is where Eli Lockaby showed that he’s here to ball, making great runs and having the confidence to take on anyone 1-v-1.

With Bolduc making close to 80% of his passes and Lockaby working the sides, Richmond just needed a finisher, and Joe Gallardo walked through the Soul Train line.

Joe danced his way in between defenders and was the difference to bring Richmond their first win of the season and three important points on the road. Winning seven of his duels, you can see Joe is growing more and more each week and the Kicker’s offense is looking better and better. This could also be correlated with their defense with Scott Thomsen and Josh Hughes winning 11 duels a piece and Wahab Ackwei proving himself to be one of the best defenders in the league winning five of his six duels, three of his four aerials, and a game-high eight clearances. When you add Josh Hughes six tackles won and five interceptions, a strong Richmond defense should allow for the offense to feel comfortable moving forward and getting back Coach Bulow’s favorite thing in the world outside of plaid shirts, possession.

Episode 58 – Breakfast With The Unsubs