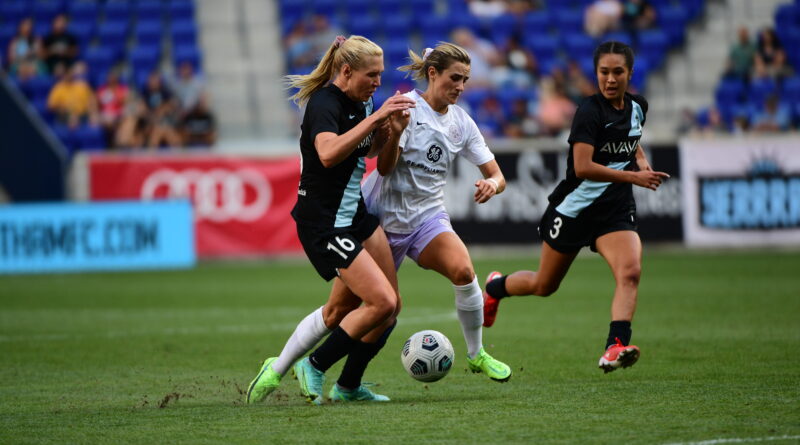 A Not So Dark Night

Racing Louisville settled for a 1-1 draw against NJ/NY Gotham FC on Sunday evening. While not an ideal result, it does mark the first time Racing has had two matches in a row without a defeat.

Louisville’s goal came in the 13′ when Nadia Nadim tapped one in off a cross from Ebony Salmon. They would hold onto this lead until the 83′ when Ifeoma Onumonu scored the equalizer for Gotham.

Nadim expressed some frustration after the match, particularly in Racing’s inability to capitalize on chances created. Specifically, she said players – including herself – fail to take their own individual chances. Instead, they try and create the perfect chance for a teammate. As a result, plenty of opportunities are wasted and Racing leaves themselves open to being drawn or beaten. Racing needs to be hungrier for a second goal that would put the game away instead of hesitating or waiting for the perfect chance.

Despite these frustrations, Nadim could still see some bright spots when looking at the bigger picture.

“I’m very disappointed but feel that there are a lot of positives in the game,” said Nadim after the match. “Gotham FC is a great team and we are a young team and this is a step in the right direction, but, you know, we want to be a winning team and a draw is not good enough.”

Emily Fox echoed Nadim’s dissatisfaction with the final result, saying, “They’re a great team. They’re in third place for a reason. We’re obviously disappointed with a tie…but I think for us, we play five games in fifteen days, so we need to move on, learn from our mistakes, and keep going.”

Despite player frustrations, Racing has a lot to be pleased with. For one, they kept a top-three team on their back foot for the first half of the match. Gotham is an incredibly tough team to go up against, and Louisville stayed competitive throughout. Second, they’ve completed their first back-to-back unbeaten matches ever, which is a nice accomplishment to achieve. And third, they’ve already earned four points in their first two games of August. This is a vast improvement over their single point in July.

Still, it’s good that players are frustrated by this match. They aren’t buying into the ‘young expansion team’ excuse at all. Instead, they’re confident they can win these matches – even in hostile territory – and aren’t going to be content with anything less than success. Coach Christy Holly says this mindset is representative of the team’s growth since the first half of the season.

“It’s probably a reflection of where we are right now, the fact that after a game we’re very disappointed by the fact that we’ve come away from home and tied 1-1 with one of the top teams in the league. I think that’s a reflection of where we are and where we’re going but we do have to clean things up and make sure we don’t concede goals in the latter part of the game.”

Nadim’s goal is her second in two games. If she and Salmon continue to build chemistry up front, they might become very dangerous very quickly.

This goal was also a milestone goal for Nadim. She’s now the fifth-fastest player to reach 30 goals in the league, doing so in 64 appearances. Only Christen Press (48 games), Megan Rapinoe (57), Amy Rodriguez (61), and Kim Little (62) are ahead of her.

Shout out to @nadia_nadim of @RacingLouFC on her 30th @NWSL regular season goal, scored in her 64th career game.

Only 4 NWSL players have gotten to 30 goals faster than Nadim:

Gotham dominated possession this match with 57% to Racing’s 43%. However, this isn’t the regression it might appear to be. Gotham is the league leader in possession, so lower possession is expected. Racing has only managed 40% against less possession-oriented teams in the past, so 43% isn’t that bad in context.

Racing stayed right around a 75% passing accuracy. Gotham is a strong, possession-oriented team, so this is a decent percentage. Still, Racing rarely gets higher than 75% and it’s passing mishaps that have led to opponent goals in the past. Staying settled and calm on the ball is something that they need to continue to work on.

Shots are a bit of a mixed bag. Racing had four shots on target compared to Gotham’s two. It’s a rare day that Racing leads in this category, so it’s something to be positive about.

However, they only had 10 shots in total. Compared to earlier in the season, 10 shots is great. But considering all the chances Racing could have taken a shot and didn’t, this number is disappointingly low. Both Cheyna Matthews and Cece Kizer had excellent opportunities but chose to pass them off to teammates instead. Nadim is right in being frustrated by this, as it’s been an ongoing problem for Racing and there are some early warnings that they’re falling back into bad habits. The fact that they’re earning goals shouldn’t disguise the fact that there’s been some regression. If they can stay aware of the problem and continue to work to correct it, however, it’s likely they can adjust it before it becomes a trend. 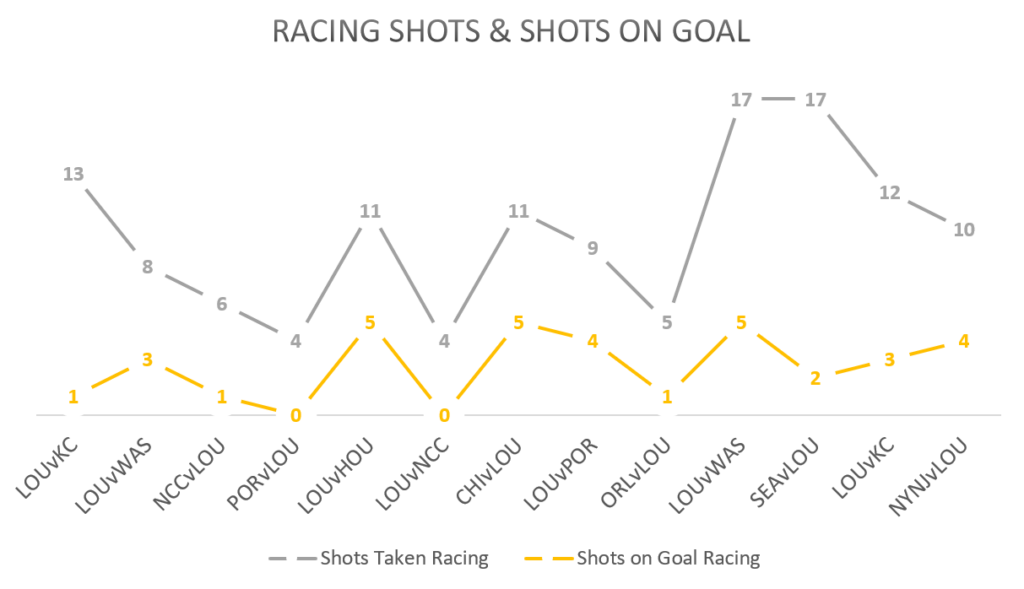 Spending multiple weeks in ninth place in the 10 team league is never fun. However, Racing should still feel confident about their progress as a first-year team. The Houston Dash earned only 18 points in their inaugural season. Orlando Pride earned 19 in theirs. Racing currently has 15 points with 11 more games to play. They’re on track to earn the most points as an expansion team in their first year – possibly by a large margin.

They’re also only four points away from that coveted playoff spot. There were a lot of draws this weekend which kept the table pretty level. As a result, there’s only a four-point difference between third place and eighth at the moment. While it will be quite a challenge to out-pace teams like Houston, Chicago, and Washington who sit a few spots higher, it’s hardly outside the realm of possibility. I said awhile back that Racing’s key to making the playoffs hinges on them beating mid-tier teams consistently. This hasn’t changed. Racing will have plenty of chances to do so soon, as they play Chicago, Houston, and Kansas City later this month.

Even if Racing makes progress on the table, they need to cut down on their goal differential. They currently have -8 which is the second-highest in the league. Goal differentials are a major tiebreaker to determine standings. With the middle of the table staying so close together in points, it has become even more important. This is one of the main reasons players need to take shots whenever a good chance comes their way instead of passing it off to a teammate. Even if only a couple actually go in, that could be all that it takes to leap a couple of spots in the standings and bring the differential closer to zero.

Racing has a very chaotic month ahead of them. Their upcoming match against the Chicago Red Stars doubles as a semi-final match for the Women’s Cup. The Cup, which kicks off on Wednesday in Louisville, is also hosting Bayern Munich and Paris-Saint Germaine who are the most recent winners of their respective leagues. This will be a fascinating test for Louisville, to go against top European talent and see how they shape up.

Most importantly, this upcoming string of games – including a match with Kansas City only four days after the Women’s Cup ends on Saturday – will test the mettle of the team. It’ll be a mental and physical challenge for players to have this many matches in quick succession. Ultimately, this span of games will tell Racing a lot about themselves. It’ll show them who they are now and how close they are to being who they want to be.

While this is a lot of pressure for a young team to face, it’s exactly the kind of learning experience that will strengthen the team. Louisville’s players have shown nothing but hunger and a drive to succeed in the first half of their season. They managed to draw a top-three team in the league – which is a success by almost all accounts – and they’re mad about it. They’re unwilling to be content with a consolation prize. This month will be exceedingly tough for Racing, but if they continue to demonstrate the same fortitude and growth they’ve shown thus far, who knows how far it will take them. 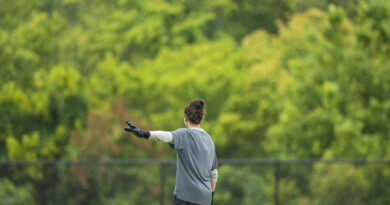 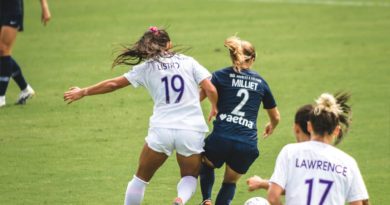 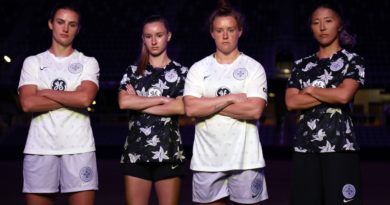