During the 2020 NWSL Challenge Cup, the world was officially introduced to the league’s new franchise: Racing Louisville FC. Not long after we found out the identity of the club, The Lavender Legion emerged as the club’s independent supporters’ group. One of the many things that makes the newly-minted SG exciting and unique is the fact that its president and vice president are both women.

“I’m so happy that two women who are extremely passionate about soccer and creating an inclusive culture are leading this pack, but I’m also really proud that we have people of different age groups, genders, sexualities, and races that wanted to be a part of our board,” Legion president Leigh Nieves told BGN. “Yes, we are two women leading a supporters group for an NWSL team, but we have an incredible supporting cast that is going to be able to provide perspectives that Robin and I don’t have and visa versa.”

Nieves, the founder of Monthly Mane, brings a unique set of perspectives to the role as she has previously written about the sport for Backline Soccer, worked for Louisville City FC of the USL Championship, and is a passionate fan. “I got into soccer after the 1999 World Cup, like most people. I wanted to grow up and be a pro player, but I was actually really bad at any sort of competitive sport, so I stuck with theatre and dance,” she said. “But, I’ve followed the USWNT ever since and started to really get into the NWSL in 2014.”

When discussing why she chose to go for the president position, Leigh explained, “I really wanted to help cultivate and bring the culture of women’s soccer to Louisville and integrate it with the already passionate fan base here in this city. I also am really passionate about introducing others to the NWSL so I thought it would a great fit for me.”

“But, I gotta give a shout out to Scouse from the LouCity supporters group Scouse’s House for pushing me to run and helping us get our initial ideas off the ground.”

Robin, the host of BGN’s Hot Brown Soccertown, has a lot of confidence in Leigh as the president. “She is a huge NWSL junkie, so she knows the ins and outs of the league,” Pryor said. “She knows how to lead people and she has this uncanny ability to deal with a myriad of personality types with grace and wit.” She also added that the relationship Nieves has with the club from her previous tenure there helps, too.

While Leigh has lived in the area on and off for eight years total, Robin is born and raised in Louisville and only spent small chunks of time away from the city that she loves. “It’s difficult to put into words what makes Louisville special. It’s home for the locals like me, but it becomes home for everyone who moves here,” Pryor said. “We are the biggest small town there is, really. We have an excellent food culture, a really unique collection of distilleries, and so many things to do all in one place. We have a sense of family without being family. I really think our physical geographic location has afforded us this eclectic mix of regional people with a touch of southern charm.”

When asked what it means to her to have an NWSL club in Louisville, Nieves responded, “Everything. It makes me emotional to even think that my city has the potential to grow and cultivate an incredible women’s pro team. This sport deserves so much respect and I know that Louisville is going to give this team the respect they deserve. Selfishly, I’m so stoked that I get to watch the best players in the world on a weekly basis.”

As you can see in the photo at the top of the article, Leigh and Robin were able to meet the man who will be coaching their new favorite club, Christy Holly, and both had positive things to say about the experience. Now, they are officially welcoming new members to The Lavender Legion. If you’re interested, you can navigate to the brand-new website, LavenderLegion.com, and join for only $5.02. Whether you join them or not, you should definitely follow the brand-new group’s journey on Twitter as the anticipation builds ahead of Racing Louisville FC’s debut season in 2021. 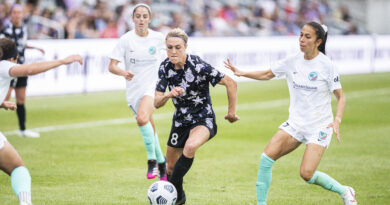 Adaptations: An Interview with Freja Olofsson of Racing Louisville and the Swedish U23s 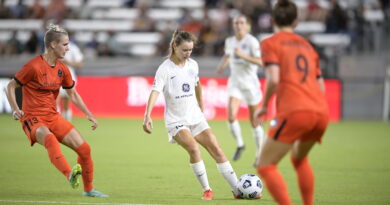