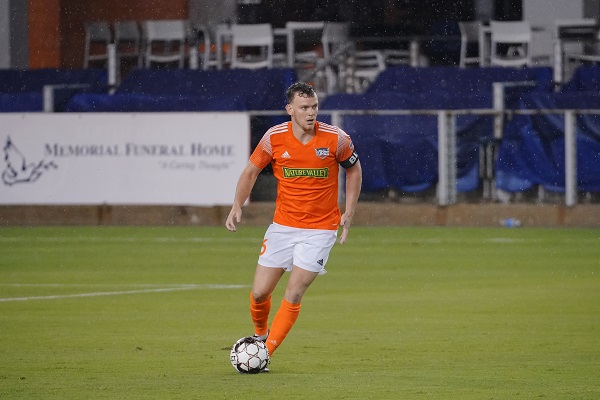 James Murphy has been one of the more consistent players for RGVFC this season. And despite the fact that his original plan would have him playing in Europe right now, he is working to make the most of his time in South Texas.

A native of New Jersey, Murphy’s dream was always to play in England. He had trials with clubs like West Bromwich Albion, Manchester United, and Sheffield Wednesday, where he signed his first professional contract and made the move to the U.K. “It was a really good experience. I had to grow up really quickly,” Murphy told BGN. “I moved away from family to live on my own in a different country at the same age most people are applying to colleges. So off the field, I really had to mature. On the field, the experience was good, too.”

“I had to get used to a different style of coaching and I really got thrown into the life of a young kid trying to make strides in his career at a big club. I think in those years in England I developed my game a lot and I also grew as a person a lot. My professional debut came just a month after signing for the club so that was a special moment for me.”

Murphy was in and around the first team, not getting a ton of first-team appearances and was a regular starter for the reserve side, which won the league and playoff double in his first season there. Then, he made a big decision to return to the United States and sign to the first-ever roster for Los Angeles FC. “Well looking back at it, it turned out to be the wrong time to come back (to the U.S.). As they say, hindsight is 20/20,” he said. “It was a pretty crazy thing though, the move to LA. I was actually in discussions with SWFC at that time about signing a new contract there. Then, one day my agent called me and said LAFC had gotten in touch with him and were interested in bringing me there.”

“At the time, I really had no interest in coming back to the States. I totally intended to stay in England for as long as I possibly could. But after a couple of discussions with LAFC, they really sold the move to me and it seemed like such a promising opportunity.” He added that it was exciting to join the expansion side with the big names in the ownership group, players like Carlos Vela, and the incredible fan base the club built from Day One.

What a day. What a place. Buzzing for the home opener next weekend #LAFC 🖤💛

But, as you can tell by the regret he mentioned above, that excitement didn’t amount to a successful stint with the club. Murphy never broke into the rotation for Bob Bradley’s side and spent some of the season on loan with Las Vegas Lights FC.

“They ended up declining my option (after the 2018 season), but honestly because of lack of game time, I didn’t plan on staying further anyways,” Murphy explained. “It was hard leaving as well. There are so many great people throughout the club. Staff, players, fans, just a lot of really good people who are great at their jobs, too. And the club is so well run, so it was definitely tough leaving after just one season. When leaving England, my plan was definitely to spend a few years there.”

Obviously, things didn’t go according to that plan. What did Murphy learn from his decision to leave Sheffield for Los Angeles? “Looking back, it just taught me that, in my career more than anything, to just trust my gut,” he said. “Deep down I knew that I didn’t want to leave England at the time that I did but I was swayed by how exciting the opportunity seemed, and also by the conversations I was having with some of the people at LAFC.”

“I also think I learned kind of the “business” side of the sport. Anything could be said over the phone or through an email, but it doesn’t really mean anything. And that was a tough lesson to learn, but a really valuable one.”

After the failed experiment back in the United States, he turned his attention back to the United Kingdom. “I really wanted to get back to the UK. So an opportunity to go to Scotland to a club called Hearts, which is a big club, came about and I had to jump on it,” Murphy explained. “I spent a good few weeks there training and then, unfortunately, I tore my quad.”

“After trying to rehab it for a few weeks it was clear I’d be missing the rest of the season so no deal got done at Hearts and I came home to finish my rehab. Once I was fit again, it was around preseason time in Scotland and I had the chance to go to Arbroath in the Scottish Championship so I went and signed with them.”

Featuring in more than 20 matches for the club, Murphy explained that it was his most consistent action in top men’s soccer. “It was a really good experience. Right off the bat in the first few games, I was awarded a couple of Man of the Match awards and was getting a lot of praise for my performances, so that was definitely big for my confidence,” he said. “The Scottish Championship is a tough, physically demanding league so I loved the challenge of that. Of course, there were ups and downs, like there is anywhere, but it really was a great experience and I was devastated when the season was cut short due to the pandemic.”

With his best professional run yet coming to an end due to COVID-19, he ventured back to America again, this time joining RGVFC. Why were the Toros the right choice for him? He answered, “A lot of reasons, honestly. Before I even went to Scotland, I came close to signing here actually. I’ve known Coach Gerson, for a long time and I knew that I could trust him, and also that he trusts and believes in me. So, because of that relationship with Gerson and because of a few really good conversations I had with the GM I got a good feeling about what it’s like down here.”

“After I decided to go to Scotland, Gerson kept in touch and when he saw the season had been called off in Scotland he reached out to see if I’d be interested in coming to RGVFC for the restart of the USL Championship season. It was the perfect chance for me to get back to playing as soon as possible, so I took it.”

He also cited the hybrid affiliation between RGVFC and the Houston Dynamo as a great chance to prove himself and impress the staff with Murphy’s aspirations to get back to the higher levels.

So far, he has proven his worth during a frustrating season for the Toros as a team. He’s been a steady passer and has created a chance in four straight matches. He’s combined his distribution with a steady motor, not surprisingly for a young player that modeled their game after legendary midfielder Paul Scholes. Despite the club’s struggles with no wins in eight matches, he doesn’t think there will be an issue of the players giving up. “Gerson and the rest of the staff would never let that happen. Honestly, I wouldn’t either,” he said. “Since the first day I’ve got here, I’ve tried to be vocal and be a leader so I’d make sure to use my voice if I thought guys stopped giving their all. And yes it’s been tough so far, but this is still a capable team and there are nine games left. We’re still going to work hard one game at a time and try and make something happen.”

That competitiveness was definitely fueled by soccer battles within the Murphy family growing up. “My brother John is as talented of a player that I’ve ever played with or against at his age and he’ll have a hell of a pro career once given a real opportunity (who spent part of last season with Loudoun United),” James said, stating that his family is his biggest blessing. “And, my brother Owen is also a really good player and a college coach somewhere is gonna be really lucky whenever Owen decides where he’ll play at school.”

“So yeah, it’s been really fun having those two to grow up with and there was definitely always plenty of competition in the backyard. Sometimes too much for my mother’s liking,” he added with a laugh.

With those rough backyard matchups in the past, James Murphy has definitely made his family proud so far in his young career and his skill and ambition will continue to propel him to greater heights. 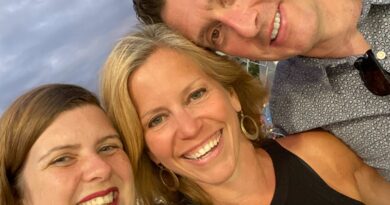