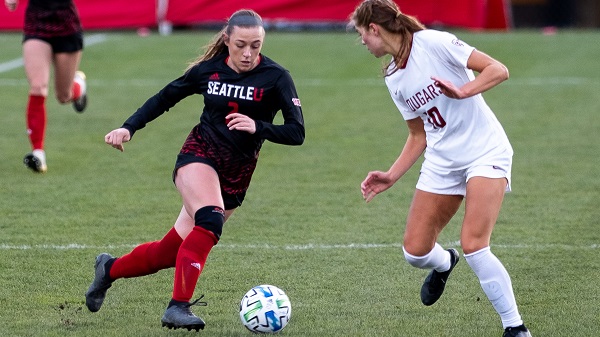 The Orange, California native started her NCAA career at UC Irvine, where she was the 2017 Big West Freshman of the Year and was named to the All-Big West Second Team. Then, Carr decided to take her talents to Seattle U. “Joining Seattle U was not anything I expected but once I heard about the opportunity I thought about it a lot,” she told BGN. “I mainly chose Seattle U because I wanted change, I wanted to move away and start a new life essentially. It wasn’t too far from home but far enough where I could start over.”

Unfortunately, that fresh start had a brutal beginning. Her first day of practice with her new team, she tore her ACL and meniscus. Sydney redshirted for the 2019 season as she recovered from the major injuries. “The entire process was not like anything I’ve ever endured in my life, physically and mentally,” she explained. “Mentally it was a struggle, wasn’t sure if I’d ever be the same player. Physically it was difficult, but as much as I wanted to play again was what helped me get match fit again.”

“It was not easy, I had to work really hard through rehab and not rush myself. And just trust the process.”

After working her way back, she enjoyed that breakout campaign last season. Carr said, “The comeback is always greater than the set back and that is what I wanted to prove to everyone but mostly myself. When I tore my ACL, I really thought that player I was, was forever gone, but my love for this game was too strong to let that happen.”

“I had expectations to prove everyone. I wanted to show more than just the people around me that nothing can stop you from your dreams if you work hard enough. I worked really hard and focused on the fundamentals of the game and focused on absolutely nothing but soccer for 18 months. Not only did I tell myself that I was going to comeback the same player but an even better player and I proved that.”

But, adversity came calling again for Sydney after her eye-catching regular season. Because she was exposed to an individual that tested positive for COVID-19, she was forced to quarantine during the WAC Tournament and couldn’t help her team. “Not being able to play in the WAC tournament was just another adversity that I had to overcome,” Sydney recalled. “The past year and a half have been tough for a lot of people, Covid hasn’t been easy.”

“It was heartbreaking finding out that I would not be able to participate in the tournament because of how hard I worked in season to get to that point; it was all I was waiting for. Although it was tough I just had to tell myself I couldn’t do anything about it and put all faith in my teammates. Not a part of me was worried that they couldn’t do it without me we have so many great players and even though we didn’t get the result we wanted we still did great. That definitely put a vision on my last season.”

Sydney and Seattle U will kick off this season tomorrow at 7 PM PT when they visit Oregon State. The star senior has high hopes for this squad in 2021. “Each year your teams changes just slightly. This Seattle U team is always special, but this year I just have this feeling that we will have this spark. We are a team that trains just like we play. From freshman to seniors were all talented in our own way and I think the personalities and different specialties is something that you don’t come by often. Fans should be beyond excited to watch us because we’re all feeling like life is also slowly back to normal and we’re ready to perform and represent our city in front of all their faces.”

In love with our future pic.twitter.com/NmvIJM4tKp

For Carr individually, there will be higher expectations for her after that breakout season in 2020. “I’ve been asked multiple times ‘what are your goals for this 2021 season?’ and my answer is always better than I did last year,” she said. “The expectation that is weighted on my back by everyone is just motivation to get to my goals.

“It won’t be easy to exceed these goals I’m going to have to work even harder than I have but I’m one of the most competitive people I’ve ever met and I have no doubt that not only I will succeed these goals but have my teammates get me there because without any of them none of it would even be possible.”

Even though it’s not over yet, Carr is able to reflect on her journey in Seattle thus far. “Tearing my ACL the first day in Seattle made my transition terrible,” she said. “For a really long time I disliked this place I wanted to go home. Tearing my ACL took a toll on my life extremely, I didn’t know who I was for a period of time, I truly had an identity crisis.”

“Sitting here today and looking back on the past two years I would have to say I wouldn’t have wanted it any other way. I told myself I wanted change and if there anything that was going to truly change me was tearing my ACL in a new city. It opened my eyes on the game, the person I am and the player I am. I grew up so much in those 18 months and it was a blessing seeing where I was and where I am now.”

Carr stated, “Seattle has been a special place for me outside of soccer because it made me grow up and look at the more important aspects of life. I thought that I would be lost without soccer because that’s all I knew, that’s who I was, but you are so much more than just the sport you play. Seattle showed me that and I’m forever blessed.” 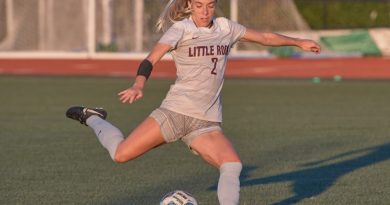 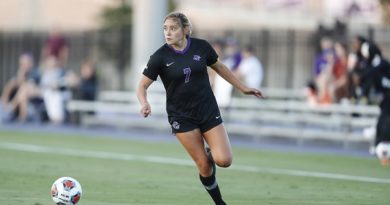 Georgetown’s Defender of the DMV