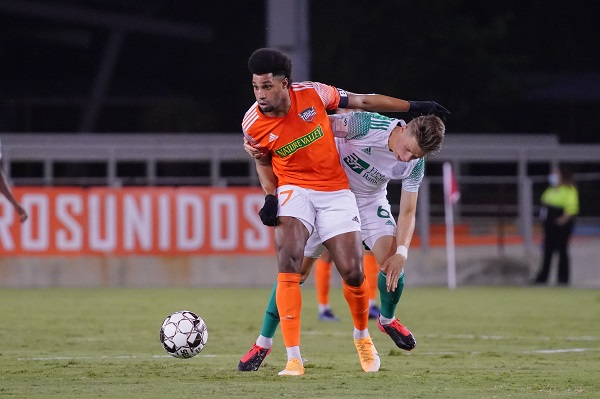 Last season was a tale of two halves for Kyle Edwards with RGVFC. The start of the season was marked by injuries and frustration before he got healthy and helped the club pick up some results down the stretch. “Well I didn’t start last season how I wanted to because of injuries, but I managed to get everything together and ended it very well with goals and an assist,” Edwards told BGN.

Battling injuries early in the season, Edwards was unable to help the Toros get results. He said, “It was really frustrating seeing the guys train and play as well because I wanted to be there so bad.”

With the club still searching for a win down the stretch and their striker finally healthy and adjusted to the tempo of the professional game, the UTRGV product went on a tear. Edwards assisted on the club’s lone goal in a loss to FC Tulsa, then scored a goal in each of the final three matches of the season. Two of those matches were back-to-back wins to end the 2020 campaign. “It gave me a lot of confidence because I showed what I was capable of and we started getting the results we wanted, which was exciting,” he said of his hot finish to the season.

In December, the club announced that Edwards would be back for the 2021 season. He explained, “I decided to come back because I have unfinished business and I’m in pursuit of a first-team contract.”

This offseason, Edwards was able to spend time with the national team for Saint Vincent and the Grenadines. He started both of the team’s World Cup Qualifiers in March. He said, “It has been extremely helpful, consistent training and also getting to play against other top level professional players.”

Now, he will be expected to be a key player under Wilmer Cabrera in 2021. Kyle said, “He’s a good coach and our goals are alike, which are to work hard, score goals, and get positive results.”

This season also marks the new, independent era of RGVFC and Edwards said the boys are very much ready and excited. For the supporters of the club, he said, “You’ll definitely see and feel a different energy. They’ll get a lot of positive results along with a great amount of fun and entertainment.”

Edwards will kick off his second professional season on May 1st as RGVFC will host New Mexico United at H-E-B Park.

League One is Here and the Championship is Insane