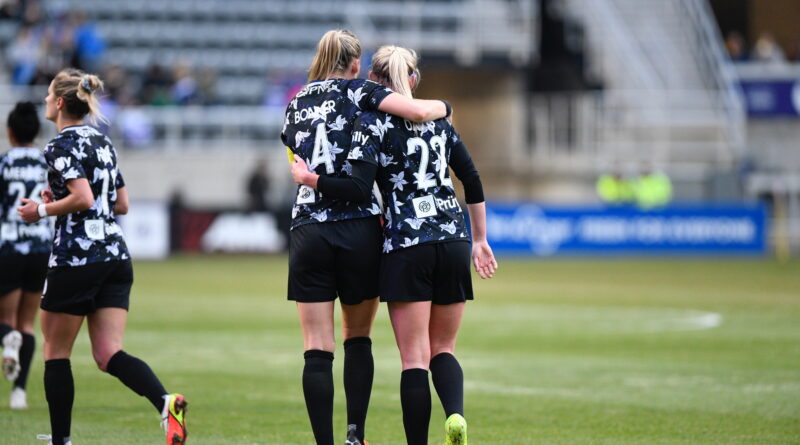 It really was the best of times and the worst of times for Racing Louisville on Friday night. They started out their match against the Houston Dash playing better than they practically ever have before. Rookie Kirsten Davis scored her first professional goal in the 16′ and Jess McDonald scored her first goal in lavender in the 40′. However, Racing just couldn’t adjust when the Dash came out on the front foot in the second half. Houston scored two goals only two minutes apart in the 56′ and 58′. The nail in the coffin came in the 65′ off a penalty scored by Houston’s Rachel Daly and the match ended 2-3 in the Dash’s favor.

“We kind of were on our heels in the second half,” said McDonald after the match. “We kind of didn’t know how to handle the pressure we were under, especially when we were tied 2-2. It was as if we just didn’t know what to do with ourselves.”

She said that she hopes her experience in the front combined with Gemma Bonner’s leadership in the back can help her younger teammates “learn from [the match] and learn to move on ’cause we’re going to be in situations like that, as we can see.”

Giving up a 2-0 lead isn’t good. Clearly, the defense needs some work. Clearly, Racing needs to work on maintaining consistency and momentum. In the second half, Racing was far too complacent with their lead. Houston adjusted at halftime, but Racing did not and that hurt them.

However, not everything is as grim as it seems on the face of it. There were actually quite a few indicators of growth during this match. For instance, both starting rookies had very good games. On a whole, the team improved offensively across almost every statistic. Racing had more shots, shots on goal, touches in the opposition box, etc. They actually improved in a few areas defensively, too. They won more tackles and had more interceptions.

Ultimately, this was a game of extremes. Let’s take a holistic view of the match and try and get a clearer picture of what went right, what went wrong, and what this all might mean for Racing moving forward.

Despite the poor turnaround, Racing actually had a more even game on Friday than they did against Kansas City. Racing’s shots were still low at only 10 but that’s an improvement over the eight they had last week. Shots on goal also improved with Racing getting a full 5 for 50% accuracy. This, again, is much improved over last week’s 25% accuracy.

In terms of defense, however, Racing once again had fewer total shots, fewer shots on target, and fewer touches inside the opposition box than their opponent. While they did hold the Dash to far fewer shots than they did the Current, the Dash were more accurate in their attacks. While Kansas City had 24 shots with 9 on goal for about 38% accuracy, Houston had 12 shots with 6 on goal for 50% accuracy. Unsurprisingly, the strong majority of these chances came in the second half.

Racing also held the majority of possession with 53% versus 47%. They even held onto possession in the second half with 51%. Passing accuracy stayed level at 72%.

All in all, Racing’s attack looks improved over last year. Even between this match and the last match, the team is pressing together more efficiently and getting better at taking shots. Racing was shut out of a large number of matches last season. In fact, the last time Racing saw the Dash they fell 0-4 at home. So if this trend continues, Racing will certainly be scoring more goals than they did last year.

Defensively, however, Racing remains very vulnerable. With the midfield becoming more stable as Freja Olofsson and Jaelin Howell adapt to their positions, the backline remains the biggest issue for the team. While individual players on the backline remain effective, they aren’t working well as a unit under pressure. All of the Dash’s goals were scored due to chaos in the box, for lack of a more technical term. The ball was pinging around and no one was able to make a good clearance. And, for the final goal, when Addisyn Merrick went to ground, Rachel Daly had the presence of mind to kick the ball at her arm and earn an easy penalty kick to win the game.

Racing will need to find a way to improve their defense quickly. Either by bringing in additional players or focusing heavily on building team chemistry across the backline. If their attack keeps improving, they’ll probably be able to win some games solely on goal production. But if their defense can’t come together better, they’ll keep throwing away leads and ultimately points.

If there’s one thing this game showed, it’s how important Emily Fox is to Racing. She left the match around the 30′ due to concussion protocols and it clearly impacted the match. For the rest of the first half, momentum carried Racing into another goal and 2-0 lead. In the second half, however, they were clearly missing her ability to intercept the ball and stop runs before they became too dangerous. Houston was able to attack relentlessly and make it into scoring position far more consistently which unfortunately sometimes caused Racing’s backline to come apart.

New acquisition Julia Lester was subbed in as a replacement for Fox and earned her first NWSL cap as a result. And she did fine, too, with eight recoveries and five clearances. Right back Nealy Martin had five recoveries and four clearances comparatively across the full match. However, in only 30 minutes, Fox had seven recoveries, most of which were further up the field than Martin or Lesters showing she was stopping attacks before they could get very far. She also had two interceptions in 30 minutes which equals Martin’s total and is just one less than Lester’s three.

There’s no question that Emily Fox is an exceptional player. She’s always been excellent but she’s only gotten better and shows no sign of slowing down. If she continues to develop, she has a shot at being one of the best in the world in her position. But Racing can’t rely on her to carry the backline. Injuries, international duty, and limited minutes are inevitable for Fox. Lester seems to be a good acquisition in terms of added depth, but Racing still only has six defenders rostered and no one except Gemma Bonner has more than a couple of years of professional experience. If Racing is going to add additional players, another veteran defender to help Bonner hold the defense together is undoubtedly the team’s most critical need.

The Kids Are Alright

Just like last week, Racing had rookies Jaelin Howell and Kirsten Davis in the starting eleven. Both players started the first match against Kansas City a bit unevenly although they also got better over the course of the match. Against the Dash, both improved markedly – especially Jaelin Howell.

Last week, it seemed like Freja Olofsson and Jaelin Howell hadn’t yet figured out their dynamic in the midfield. Howell is now playing as Racing’s six which was Olofsson’s position last season. As a result, Howell disappeared a bit against the Current as Olofsson continued to fall back into defensive habits. This week, however, they seemed to have worked everything out. Howell became a much more effective player on the pitch. She had the most touches of anyone on either team and led Racing in duels (15) and duels won (11) by a large margin. She also led both teams in tackles (5), tackles won (5), and interceptions (4). Howell also had the most chances created (2) for Racing and tied Maria Sanchez with the most chances created across both teams.

As for Kirsten Davis, she was the undeniable offensive leader of the night. She looked consistently dangerous and did a great job of pressing high throughout the match. This earned her the most touches in the opposition box of anyone on the team. And, in addition to earning her first professional goal, she had the most shots of anyone on either team (4) and tied Olofsson for top in shots on goal (2). Interestingly, she also showed she can be effective on either side of the field. Last week, she primarily played on the right while this week, she played quite a bit on the left. Between Davis’ versatility and impact in attack, it’s clear why Racing protected her in the expansion draft.

Of her goal, Davis said, “It was really an incredible moment. I’ve been thinking about having my first goal here for over a year now, but, more importantly, I wish we had won the game because we had good goals and good team building in the first half. I think the first half was the best we’ve played literally all preseason.”

Despite a very tough second half, it’s undeniable that during the first half Racing looked like a completely different team. For 45 minutes they were able to reach their potential and play like a cohesive unit. According to Davis, in that first half “everything was just clicking.”

“We were able to move off the ball, so every time we had the ball there was always option so it wasn’t forced like it was just flowing so naturally and I think that’s what we’ve been looking for and we’re taking steps in the right direction.”

Tapping into that natural flow is important, according to Davis, because now that player have done it, they’re more likely to be able to replicate it again in the future.

“For the players are on the field,” said Davis, “we just need to remember what that feels like when we’re playing our best like that. I think just knowing and remembering how that feels, we just need to have that mentality going forward.”

Racing has never given up a 2-0 lead before, but that’s because Racing has almost never been in the position of having a 2-0 lead. They’ve actually only held a 2-0 lead exactly twice in their history. The first was the 3-0 win against Chicago last June and the second was last Friday.

Not to put too positive a spin on a bad loss, but it’s a good sign Racing even made it to 2-0. As mentioned above, Racing got shut out regularly in blowouts last season: 0-5 versus the Courage; 0-3 against the Thorns; 0-4 against the Dash. In fact, they scored two or more goals only eight times across all competition in 2021 (29 total matches including the Challenge Cup, the Women’s Cup final, and the regular season). It’s undeniable that they’re still letting in too many goals, but if they can keep improving offensive production they’ll at least be more competitive.

Additionally, it’s important to remember this is a very young team. Racing has the youngest average age of any team in the NWSL coming in at just under 25 years old. Many of the players are experiencing games like this for the first time. They don’t yet have the experience to buckle down and course correct when things start going wrong.

After the match, Coach Kim Björkegren said that this match was similar to the first game in that “we almost get a little afraid to win, and we need to change this as soon as possible.”

How Racing responds to this loss will be very telling. With a 0-5 or 0-3 loss, it’s easy to say ‘we just played poorly’ and become resigned to losing. A blown 2-0 lead is much harder to swallow but hopefully, the team can see that they do have the ability to play very well together. They just need to focus on consistency and holding together when the tables turn. As Davis said, they tapped into something during the first half of the match. They moved as a unit and read each other better than they’d practically ever done so before. If they can shake off the sting of Friday’s game and hold onto that feeling, this team will have a lot of potential moving forward. 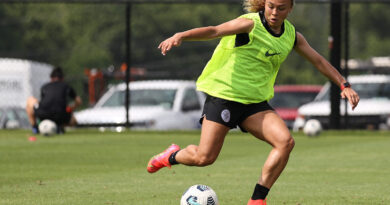 Reinforcements Arrive: How Racing Louisville’s Lineup Will Change After the Break 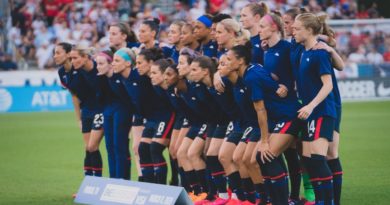 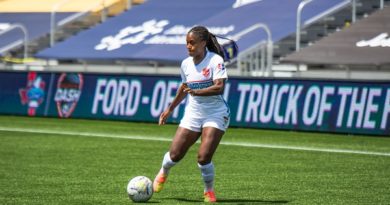