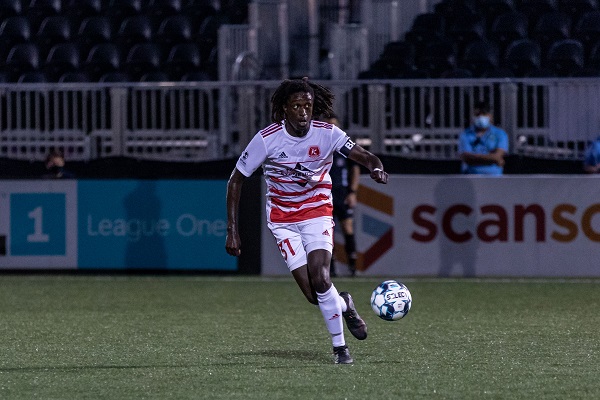 Richmond Kickers midfielder Mumbi Kwesele split his college career between Barry University and Humboldt State University before his soccer journey took him overseas. “Before I got to Richmond, I spent a year in the Basque Country of Spain playing for Real Unión Club de Irun,” Kwesele told BGN. “I wasn’t surprised at the level of quality I played with and against each week overseas but I quickly figured out that the game was also incredibly physical too.”

“Most people associate the Spanish with beautiful possession soccer but some of the ugliest and scrappiest games I’ve ever played in happened there; ultimately, the majority of teams were more concerned with the result of the game than with the way it looked and that provided a lot of opportunities for me to grow tactically in different positions. Off the field, I think I was humbled every single day because as a foreigner, I was constantly facing some kind of adversity whether that was learning Spanish or familiarizing myself with the different cultural customs of both the country and region.”

Last February, the Seattle native was able to return to the United States and sign with Richmond. He made six appearances, three starts, for the Kickers in 2020 and registered an assist. Mumbi explained, “I think I showed bits and pieces of what I am capable of in 2020 in multiple positions. Injuries were a major hurdle for me last season and if I’m going to have a bigger impact, I need to be healthy.”

Now, Kwesele is back with the Kickers for the 2021 USL League One season. “I’m really happy to be back in Richmond this year because we have a really great group of people who are all on the same page when it comes to the vision of what our club can be,” he said. “I feel like this club is the right place for me with the kind of culture we’ve created and my continued development as a player and person.”

“I expect to contribute when I’m called on to do so, I just need to be available and ready. I expect this team to take the season one game at a time with the confidence and quality to beat any team on any day.”

Kwesele and the Kickers will get their first chance to get a win this season tomorrow when they travel to face New England Revolution II in their season opener. Kickoff is set for 5 PM Eastern and the match will be live on ESPN+.

While blazing his own path in the soccer landscape, Mumbi is also looking to help the next generation find their footing. “The Rising Point is an organization I founded with my brother, Mutanda in 2016 with a mission to develop quality people and build community, particularly focusing on underserved communities that are oftentimes unable to access club soccer,” he said. “For me, one of the most significant aspects of this project is the way my older brother has made an intentional effort to go to neighborhoods where the children we work with have similar upbringings as we did.”

“As the children of African immigrants, my brother and I are aware of the political, social, and economic barriers that stand in the way of our advancement as individuals and as people. Historically, these kids that look like us have not had real opportunities to excel and this is the result of the resources they are provided with (or not provided with), not because of a lack of ambition or talent. The Rising Point is a project that aims to fill that gap and help these children grow to be more aware, intentional, and responsible both on and off the field.”

Recently, Mumbi also launched the ELEVATE Training Program. “ELEVATE has a similar mission and ideology as The Rising Point and is a personal project I have been working on while I am distant from my brother due to our current work situations,” he said. The biggest strength that my brother and I can possibly have is our unity so we will be collaborating again very soon.”

As you can tell, family is very important to Kwesele. “Since I was young, my entire family has been incredibly supportive of my soccer journey,” he said. “My brother, Mutanda and I have a special bond because we have both tried to go the distance and excel at the highest levels of the game possible. He has been my coach and mentor for as long as I can remember and I don’t know if I would be where I am today without him.

“I’ve been lucky to be able to follow the example of such a dedicated, hard-working, and humble individual like him. I think that every young person needs someone like him to guide, support, and love them every step of their journey.”

Kwesele is also appreciative of the support he and the club receive from Elliot Barr, who co-hosts the River City 93 and Can I Kick It? podcasts along with Chenier Durand II. Discussing what it means to him to see a podcast of two Black men covering the Kickers in a media landscape that desperately needs more diversity, Mumbi said, “It makes me incredibly proud to see Elliot and River City 93 doing a brilliant job of covering our club and being a reference point for the soccer community both here in Richmond and abroad. It’s true, there needs to be more diversity in media in this sport; this is not a new sentiment or challenge to both our sport and society.”

“The fact that we need to continue to speak this out loud says a lot about how far we have to go. For many individuals and organizations, this means drastically rethinking and restructuring the way things have been done in the past in order to provide more pathways forward for diverse voices and perspectives in media, coaching positions, and front offices.”