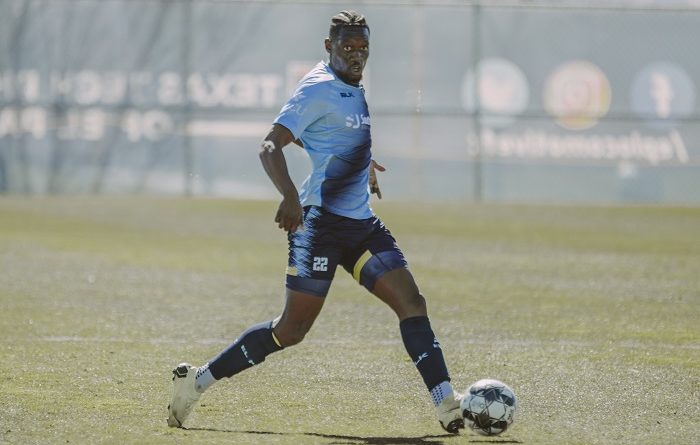 Moses Makinde talks about the journey that soccer has taken him on so far.

“You have any idea what I had to do to get where I am today? When I say I’m ready, you best believe it.” That is a quote from the character Stringer Bell from the legendary TV series, The Wire. Bell is a key figure in the Baltimore-based show and is played by London-born actor Idris Elba. El Paso Locomotive FC defender took a similar path as he was born in London and then moved to the Charm City. “I am a huge fan of The Wire. I always say it was ahead of its time. To me, it’s one of the greatest shows of all time,” Makinde told BGN. “In the early seasons, I liked Stringer a lot, but as the show went on, I wasn’t too keen on his character.” He lists some of his favorite characters as Detective McNulty, Bunk Moreland, Snoop, Marlo, and Prop Joe.

Another popular character on the show, Omar Little, used to say “It’s all in the game, yo.” For Makinde, that game is soccer. As an amateur, he starred for the Baltimore Bays and won multiple national championships.  “I think the key to our success was our commitment to excellence at an early age. A lot of us had soccer backgrounds, we came from countries where soccer was the sport to play,” he explained. “The players that were born in the city had the same commitment to excellence and wanted to be great. We had guys who were students of the game and aspired to play at the highest of levels.”

Does Makinde think that B’More should be more well-known for its soccer talent? He answered, “I do think Baltimore is under-appreciated when it comes to soccer. There are a lot of talented players in the area, to take it a step further, I would say the whole state of Maryland. Our team consisted of players who lived outside of Baltimore. The DMV area has a lot of quality players who have gone on to play at the highest of levels.”

Another talented player in the area was his older brother, Tosin. Talking about when they played together at Charlton, Tosin had a notable chipped goal which Moses remembers fondly. “That’s a moment that I’ll never forget. He was amazing as a kid and I looked to him. I knew what he was going to do and he pulled it off,” Moses recalled. Currently, Tosin is a must-follow on Twitter, the host of the Shirtless Plaintain Show, and much more. I asked the younger Makinde brother what he is better than Tosin at. “We go back and forth on a lot of things, but I’m a better athlete, better driver, way better at FIFA,” he laughed. “I would say he’s more creative, he’s a really good writer. He’s funnier, he’s the joker in the family, and he has the better wardrobe. I still take some of his clothes.”

Moses has definitely proved his athletic prowess for the Makinde family. In addition to the United States, he’s played professionally in Germany, Sweden, and England. “Playing in different countries taught me a lot. You learn a lot about yourself when you’re in a foreign country and you don’t speak the language,” he said. “It’s not easy to be away from your family and to be on completely different schedules. In regards to the game, I learned a lot from different coaches. From tactics, to how to train, and how to conduct yourself as a professional. On a personal level, I was pushed out of my comfort zone and learned how to really interact with people from various backgrounds.”

His professional experience in the United States began last season with Tulsa Roughnecks FC. He was traded partway through the year to Locomotive FC. “Whenever you change clubs and move cities, there are always difficulties,” he explained, saying that this move was not too difficult. “The players and staff were very welcoming. Everyone in the organization that I came across during my transition was very helpful and went above and beyond to help me get settled.”

Moses was able to help the first-year club get to the USL Championship playoffs and take the eventual champions, Real Monarchs SLC, to added extra time in the Western Conference final. “Last season was a good inaugural season. Looking back, we are happy with the run we made to the Western Conference final,” he said. “But with that said, we feel like we were capable of winning it all last season. We are going into this season with the mindset that 2019 was good but not good enough.”

“Our goal for 2020 is to be better and win it all. We have a great group of guys. The key for us is to stick together through good times as well as adversity. As I said before, we play a very attractive brand of soccer but adding more intensity to our game will be important for us achieving our goals this year.”

Moses Makinde was an unused substitute in El Paso’s opening night draw on the road vs. Orange County SC. That was a quality result to begin the season and Locomotive FC will host Portland Timbers 2 on Saturday. Tickets are still available and there will be fireworks and a flag giveaway at Southwest University Park.

Being a sponge! featuring Trevor Spangenberg