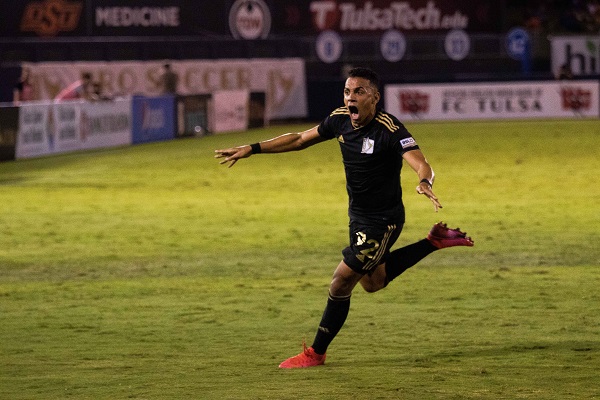 While San Antonio FC have run away with Group D, there is a close battle between FC Tulsa and Austin Bold FC for the second playoff position. Currently, Tulsa holds a one-point edge over Bold FC and a big reason for that is the current form of the scorching hot Dario Suarez.

In the club’s current four-match unbeaten run, Suarez has scored all six of Tulsa’s goals while giving the club the credit for working hard to put him in this situation. He was named to the USL Championship Team of the Week for the second time in a row and was the runner-up for Player of the Week. When Suarez has found the net or assisted this season, FC Tulsa are unbeaten in those six matches. The Cuban’s versatility makes him especially dangerous in the attack. He’s featured out wide more often lately after playing primarily as a striker earlier this season. “I’ve played winger, #10, #9, my entire career, so I feel confident in every single position,” Suarez told BGN. “I’ll play any position to try and help the team.”

This success is coming in his first season in the USL Championship, following two years with The Miami FC in lower divisions. While he noted that the football is quicker and the players are more physical, Dario said, “I enjoy the challenge, the big challenge, and I’m always ready for the next step.”

He’s not the only star to move from Miami to Tulsa, Oklahoma this offseason. He was joined by compatriot Ariel Martinez, who he played alongside in his initial call-up to the Cuban national team. The FC Tulsa captain Martinez, who defected just days after Suarez during the 2015 Gold Cup, has assisted on two of Dario’s eight goals this season. “You see the connections in the game, on the field and outside the field,” Suarez said. “He’s a really good friend and an amazing player, too.”

A SHOWSTOPPER FROM SUPER DARÍO!!

Martinez can also understand the sacrifice that Suarez made when he decided to make the move to the United States. Dario hasn’t seen his family in five years and said that he has to wait three more years. But, he knows why he made the difficult decision. “On the other side, I’m making my dream come true right now. Playing professional and at the next level, trying to prove myself,” he said, adding that he always talks to his family when he can.

He’s proving himself very worthy at this level and has Tulsa close to its second postseason berth in the club’s history. Suarez’s scoring will be needed in the final four matches as they try to fend off Bold FC. Comparing every match to a final down the stretch, Dario said, “200% effort in every single game.”

“It’s a situation where you have to fight and give your best every game.”

Next up, Suarez and FC Tulsa will travel to South Texas on Saturday night to try and defeat RGVFC for the third time this season (two of the club’s previous three wins are against the Toros). The last time these two sides met, Suarez bagged a brace in a 2-1 victory.