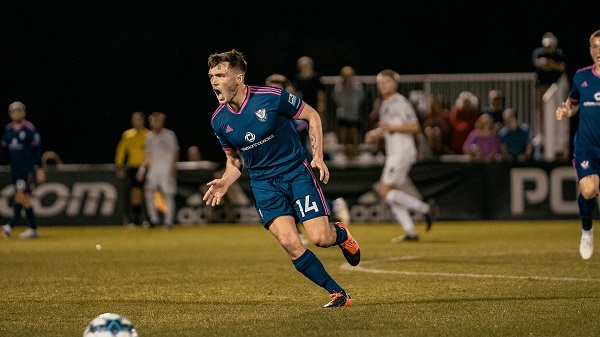 Midfielder Craig McCall has kicked off his professional career with five appearances off the bench for South Georgia Tormenta FC. But, it hasn’t been a storybook beginning for the 24-year-old rookie. McCall told BGN, “It’s been a frustrating start to my professional career at Tormenta spending the majority of preseason and the start of the season injured, so first and foremost, I need to get back up to speed and fitness so I am able to contribute and help the team more.”

Corresponding with McCall’s frustrating individual start to the season, Tormenta FC have struggled for results out of the gate, 1-5-0 in their first six USL League One matches of 2021. McCall said, “We need to stick together and believe in what we are working on as a group. It’s been a tough start, but the games have all been very close and settled by the smallest details, so we aren’t too far off, although the results might seem that way.”

On what he can do individually to give the club a boost, he said, “I believe my defensive work rate and energy can help the team get out of this tough time.”

Craig might be at the beginning of his professional career, but he’s far from new to the sport. His grandfather, Andy, and father, Stuart, both played professional soccer with Stuart even featuring for Scotland in the 1990 FIFA World Cup. In regards to being a third-generation professional footballer, the young McCall said, “I think being able to play professional soccer is a special thing, but, yeah, I’m proud to be able to keep up the tradition within the family.”

“There was never any pressure from within the family, if I was working hard and giving my all, that’s all my dad asked. There was pressure from the outset at times, along with very high expectations, but I learned to just focus on myself.”

Following his playing career, Stuart has had a lengthy managerial career, including serving as caretaker manager for Rangers and three stints as the boss at Bradford City. “Yeah it’s always helpful to receive feedback and get his thoughts,” Craig said of his father’s insight as a manager. “I’d call him and catch up after my games where he’d give his honest opinion of what he thought. But it’s his insight as a person and his character in which I find most helpful.”

Over the weekend, another Scottish athlete was on center stage as boxer Josh Taylor became the undisputed champion at 140 lbs. with a unanimous decision win over previously undefeated Jose Ramirez. When asked if he’s a fan of Taylor, McCall responded, “Yeah of course. I think most of Scotland was focusing on their TVs that night. It’s a remarkable achievement, and he had a great fight.”

“He has represented Scotland brilliantly and the country was proud. It must have been a special night for him, as well as the whole of Scotland. Next up for Scotland is Euro 2020 so hopefully the team can bring success in the tournament, which will really get the nation bouncing.”

McCall will look to write his own legacy, starting with his time in Georgia. “Yeah, my time here has been enjoyable so far,” he said about living in the Peach State. “There’s some great golf courses around which the boys use regularly, so the driving range or a round of golf is popular. Trips to Savannah and Tybee Island are also fun when we get a day off.”

Tomorrow, McCall and Tormenta FC will host Forward Madison. Kickoff is set for 7 PM Eastern and the match will be live on ESPN+.