Racing Louisville did something they’ve never done before on Friday night: they rallied from a two-goal deficit to draw the Washington Spirit 2-2. The comeback was thanks to veterans Nadia Nadim and Jess McDonald who combined for both goals. These goals are Nadim’s second and third on the season, but only the first two in the run of play after returning from an ACL, MCL, and meniscus tear last season. McDonald is the NWSL’s All-Time assists leader and these two stats give her even more padding to keep her in the lead.

The game started without either team able to get a foothold for around the first 20 minutes. Neither team even got a shot off until the 19th minute, but once the Spirit started, they couldn’t be stopped. They attacked relentlessly until the 34th minute when Trinity Rodman outran Emily Fox along the right flank and sent a rolling ball across goal and into the far post. Less than 10 minutes later, the Spirit added to it when a shot from Ashley Hatch was initially blocked by keeper Katie Lund but collected and sent in by Madison Elwell.

“It was a really tough first half,” admitted Nadim after the match. Still, the team got together and discussed how the game wasn’t over yet. They still had time to make a comeback. Nadim told her teammates “if they can score two goals, we can definitely do that” and it ends up she was right.

Immediately in the second half, Racing came out on the front foot. In the 50th minute, DeMelo made a run into the box and her cross barely missed the feet of Jess McDonald. After a corner was deflected a minute later, Julia Lester collected and passed to Nealy Martin who got a good shot off. In the 56th minute, Nadim was subbed in and made a quick impact. Racing’s first goal was scored in the 66th when a through ball from McDonald found Nadim’s feet and Nadim was able to charge in the box and beat the keeper one-on-one. Both teams exchanged chances for the next 15 minutes but Racing remained energized and hungry for the win. In the 88th minute, a long ball from Emily Fox was collected by McDonald to the right of the penalty box. She got a cross off that found the head of Nadim and the game was tied.

“It was worth more than one point for us,” said Racing coach Kim Björkegren after the match. “We know that we’re maybe the youngest team in the league. For this team to learn and see that fire, they can give us a point in maybe one of the most difficult away games in this league. It was an important one.”

📼 Hey @CobraKaiSeries, there's a familiar move in our highlights you might recognize! 📼#WASvLOU presented by @Nationwide pic.twitter.com/ooHIN77Zmk

This game was notable in a few ways for Racing and its players. For one, these goals were Racing’s first brace ever. This was also Jessica McDonald’s first multi-assist match since 2019.

To demonstrate just how much change there was in momentum in the second half for Racing, they only had 2 shots with none on target in the first. They then had 6 shots with all 4 of their on-target shots in the second half. They also only had 44% possession in the first half but managed to pull back to 49% in the second. The Spirit, on the other hand, stayed relatively level in both halves with their shots split evenly 13 and 13 in each half.

Although Nadim was clearly the offensive player of the night, substitute Kirsten Davis put in a good showing with a very close chance in the 87th minute. Her shot, which was knocked down and handled by goalie Kingsbury, generated the next most xG (0.16) to Nadim’s (0.37).

Jaelin Howell also had a good night. She won 8 of her 15 duels and won possession back 7 times. She also won 4 out of 5 tackles.

It seems very clear in this match and even the last one that it’s doing no one any favors to leave Jess McDonald isolated up top as the lone striker. She’s an exceptional player on her own, but she’s clearly so much better when she has another striker to play off. Even in North Carolina, she was often at her best playing off of Lynn Williams.

It would probably be for the best if Racing tried adjusting their formation to at least a top-two where Jess could play with another striker. And Racing certainly has enough of them. Ebony Salmon has been lacking minutes. In the preseason, McDonald said Kirsten Davis was one of her favorite young strikers to work with. And, of course, there’s Nadim.

Unfortunately for Racing, Nadim will be gone from now until probably August thanks to the UEFA Euros. But there’s no reason to think McDonald couldn’t build as good chemistry with Salmon or Davis before too long.

Nadim won’t be able the only player leaving soon. Racing will also be losing Emily Fox and Satara Murray to the Concacaf tournament for most of July. Thanks to the departure of Erin Simon and Addisyn Merrick, Racing will only have three defenders rostered in July. It’s also possible Rebecca Holloway will be called away for Northern Ireland for the Euros which leaves things pretty dire.

Luckily, Racing does have some options. They can sign players as tournament replacement players if necessary. They also have the roster space to make permanent signings, should they be interested. But either way, they’ll have to make some moves quickly to fill these gaps.

My Own Worst Enemy

More than any opponent, Racing remains its own worst enemy. Mistakes cost them the game against Angel City despite playing very well and, this time, mistakes nearly cost them again.

Probably the biggest issue with the team right now is the number of unforced turnovers they create. Passes are missed and go out of bounds despite there not being any pressure. Passes are rushed without checking to see where teammates are moving and the ball gets intercepted easily. These errors continuously hand possession to the opponent and, too often, they hurt Racing as a result. If they’re going to be a successful team, Racing needs to find consistency in their play and have better concentration to keep from getting outplayed.

That being said, this is a very young team. Racing is leaning very hard on rookies and first-year players to carry them and no matter how good those rookies and first-year players are, they still need more experience before they truly understand the league. Younger players get rattled more easily and have a harder time rallying and pulling together. McDonald, Gemma Bonner, and Nadim have done an excellent job of leading their young teammates, but there’s no question that, as good as the young ones are, they still need more experience.

Regardless of all the above, however, the most important thing is that Racing stopped their 3-game losing streak. Although the players have seemed positive and kept energy high, a fourth loss would have been very hard to overcome mentally. And it’s clear they knew that, too, because they ultimately fought harder at the end and won the point.

To see Racing have that fight in them is a good development for the club. If all the other issues listed above get corrected, it still won’t mean anything if the team doesn’t have the mentality to come back from behind. It won’t mean anything if they don’t believe they are capable of getting a result. So if Racing stays mentally resilient, that’ll be a major step in improving their odds in the future.

It’s still a long path ahead of them, though. As of Friday night, they’re still in 9th place with their goal differential keeping them a bit behind the Spirit. A win for any of the three teams below Racing means Racing will drop farther down the standings. And with the Euros and Concacaf and other tournaments looming ahead in July, all rosters will be in disarray. As hard as it will be to lose Fox and Nadim, Racing is going to miss the fewest players of practically any team. Time will tell if they can use this period of disruption to make up some ground.

For now, however, Racing’s players can take a small rest and feel proud of their accomplishments. This game was more than just a tie, it was a successful battle back to beat the odds. They stemmed the bleeding and can now at least go into the international break knowing they accomplished something big. 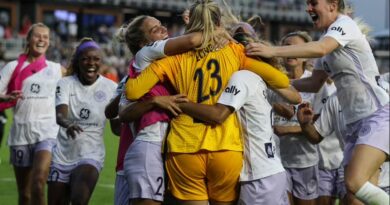 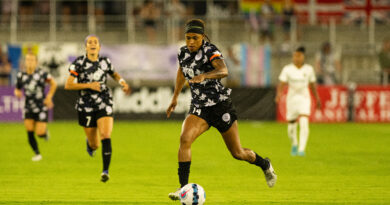 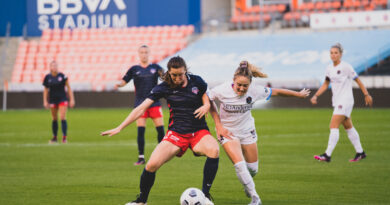