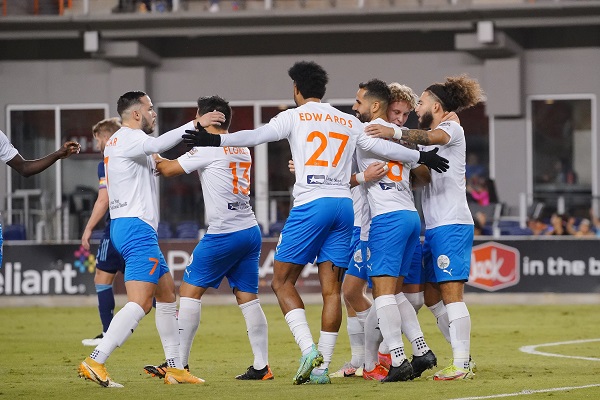 Needing a win to get into the postseason, RGVFC went on the road and handled business against El Paso Locomotive FC. Now, the Toros are set to face Phoenix Rising FC in the USL Championship Conference Quarterfinals.

Before turning the focus to the postseason, the RGVFC players and staff need a lot of credit for the win over El Paso. An early penalty from Rodrigo Lopez put the Toros on the front foot and Kyle Edwards continued his great form with a brace. Emilio Ycaza provided the insurance goal late and it was an impressive performance overall against the winners of the Mountain Division. Edwards was named USL Championship Player of the Week and was joined on the Team of the Week by teammates Baboucarr Njie, Rodrigo Lopez, and Christian Sorto (Lopez and Sorto on the “bench”).

The Toros finished one point clear of New Mexico United for the final playoff position in the Mountin Division. El Paso, San Antonio FC, and Colorado Springs Switchbacks FC finished ahead of them on the final table.

How about this for some simple math…

After stints in MLS with the Houston Dynamo and Montreal Impact, Cabrera got RGVFC off to a hot start this season before a lengthy winless run put their playoff dreams in jeopardy. But, three straight wins to end the regular season have his side getting hot at the right time.

One tactical change that’s benefitted the team is the addition of attacking ability to the full-back/wing-back position. Deploying a typical full-back for much of the season, Wilmer has utilized natural attacking/midfield players like Juan Carlos Azocar and Baboucarr Njie down the flanks. That puts more pressure on the opposing defense and has allowed the RGVFC attack to flourish.

While there has been an injection of youth into the lineup throughout the year, this is still a very experienced roster. Players like Tyler Deric (33 years old), Erik Pimentel (31 years old), and Rodrigo Lopez (34 years old) play key roles for the Toros and there are other veteran, former Dynamo options like Juan David Cabezas (30 years old) and Vicente Sanchez (41 years old) that can be trusted if called upon.

All that being said, it will take a masterful performance from RGVFC to upset Phoenix Rising FC. When they played earlier this season in Arizona, it was a comfortable 3-1 win for the hosts. The only previous playoff appearance for the Toros was a heart-breaking loss vs. OKC Energy FC as the club conceded twice in stoppage time to lose 3-2.

Top Toros To Watch vs. Phoenix

Kyle Edwards: Similar to his frustrating 2020 season, Edwards wasn’t able to make the impact that he would’ve wanted to until late in the year. But, he’s been huge down the stretch with three goals and one assist in October.

Tyler Deric: The spotlight on goalkeepers gets brighter in the postseason and the Toros have a big-time performer between the sticks in MLS veteran Tyler Deric. With the Dynamo, Deric made two postseason appearances and both were clean sheets, making eight saves across the two matches in 2017.

Jonas Fjeldberg: Arriving on loan from FC Cincinnati earlier in the fall, Fjeldberg was a much-needed boost to an RGVFC that was stagnating before he debuted in late September. He has three goals and two assists in just eight appearances and the club has only lost twice when he’s played.

Despite back-to-back draws to close the regular season, Phoenix Rising FC enter this weekend’s match expected to win vs. the Toros. They finished 15 points ahead of the second-place club in the Pacific Division, tallying the most points in the Western Conference (67).

RGVFC will be staring down the most explosive attacking club in the USL Championship. Rising FC finished #1 in goals (68) and shots (628 with more than a 100-shot gap between them and second place), plus they carried the best goal differential (+33). That last category shows that they are not just an offensive powerhouse but also a very solid defensive group, too (fifth-fewest goals conceded).

Unlike the Toros, Rising FC is extremely experienced in postseason play. They have made the playoffs every season since 2017 and made it to the final in both 2018 and 2020. Also, Phoenix performs better at home than any club in the league in recent years. In addition to their 11-0-5 record at Wild Horse Pass this season, they only lost two matches combined at home in the 2019 and 2020 seasons.

Santi Moar: An experienced player in the USL Championship, the Spanish forward finished tied for seventh in goals (16) and third in shots (81). He also added four assists.

Solomon Asante: The two-time reigning league MVP, Asante finished second on the team in goals (eight) and assists (seven). With his skill and speed, Asante is a nightmare for opposing defenses.

Aodhan Quinn: He led the club with 11 assists and 84 chances created (second-most in the league). The veteran midfielder was an MVP nominee and first team all-league performer in 2018 with Orange County SC.