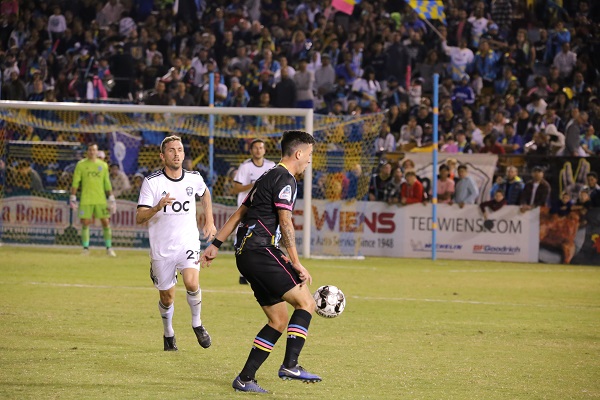 After a loss in their return match to San Diego Loyal SC, Las Vegas Lights FC will play host to their in-state rivals on Saturday as Reno 1868 FC comes to Cashman Field for the first Silver State Cup (I still don’t like the rivalry name, but that’s a discussion for another day) of 2020.

If you had expectations of the Lights looking crisp and in midseason form vs. San Diego, you were sorely mistaken. They were coming back from four months of inactivity and a change in manager. But, they looked better than I anticipated vs. Loyal SC.

The defense was pretty stout overall, as expected with their talent and depth there plus Frank Yallop’s defensive-centric managing style. But, it’s the attack that may be the most intriguing.

Seku Conneh looked really promising up top before departing in the first half with an injury, but if he’s healthy enough to go, a trio of Conneh, FC Cincinnati loanee Rashawn Dally, and Yamikani Chester is explosive to say the least. All three players are tall, difficult to knock off the ball, and have great pace. They can flip the pitch quickly on a counter-attack and the Lights do have Raul Mendiola, Jose Carrera, and the Juniors (Burgos and Sandoval) to feed them through balls. I don’t expect Las Vegas to have an elite attack, but they will certainly have one that’s potent and can get past you in a hurry.

Christiano Francois: The USL veteran continued a good start to the season with a highlight-reel goal followed by a late penalty mid-week vs. Portland Timbers 2. The Haitian international leads the team in goals (3), chances created (6), and has the pace, movement off the ball, and skillful dribbling to make it a long night for the Lights.

Thomas Janjigian: He’s been with Reno since Year One and after three matches, the 25-year-old defender leads the club in clearances, interceptions, aerial duels won, and passes.

Corey Hertzog: He’s one of the most consistent attacking players in the USL Championship. Last season, he scored 18 goals in the regular season and 32 goals in the three seasons prior. While he hasn’t scored yet this season, he’s always a threat to open his account.

Live on ESPN+, no fans permitted at Cashman Field