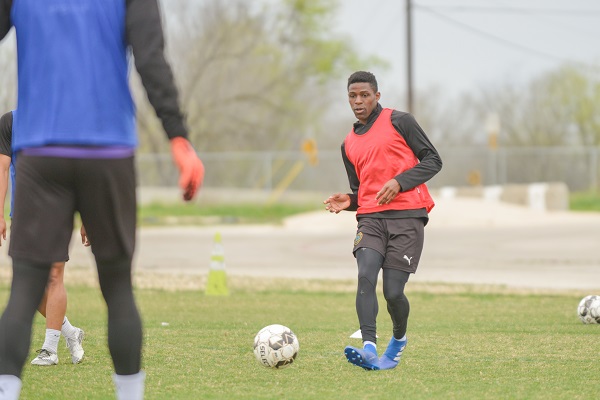 Ten years ago, Kofi Sarkodie was the 7th overall pick in the 2011 MLS SuperDraft by the Houston Dynamo. Now, Sarkodie returns to the state of Texas as a 30-year-old veteran with Austin Bold FC.

Sarkodie played nearly 100 matches for the Dynamo from 2011-2015 before spending two seasons with the San Jose Earthquakes. In 2018, he made a move to Trelleborgs FF in Sweden. He played one season there and hasn’t been on a professional soccer roster since. “The last few years, they’ve been pretty life-changing for me in a lot of ways,” Sarkodie told BGN. “I think most notably during this whole COVID epidemic, I had lost my grandmother, who was really like a mother to me.”

“And then a few months after, my father became really, really ill and so I became his caretaker and basically was helping him, through his therapies and with his day-to-day needs. So, it’s definitely been kind of eye-opening and really humbling.”

Then in February, Sarkodie made his return, signing with Bold FC of the USL Championship. “I really appreciate and respect what Coach Marcelo (Serrano) is trying to do with the club,” he said about his decision to sign with Austin. “I’m in touch with this vision and I said it in an earlier interview that great management and great teams I think are strengthened by great leaders.

Another factor in his decision was the chance to play with one of his best friends, Amobi Okugo. Sarkodie said, “We’ve known each other since we were 13 and got together with a youth national team camp. We thought it’d be pretty awesome just to hit the pitch together again and just have the opportunity to live and play and kind of the town of Austin together again.”

“All in all, it’s really just a great opportunity for me to be down here in a great city with great energy, and a great fan base.”

This year, Austin will have two professional soccer clubs with Bold FC and Austin FC of MLS. “I think Austin has a real taste for the sport down here,” Kofi explained. “Realistically, I just recently arrived, but already I can see how excited people are about the Bold and about FC. I really hope both teams just can continue to engage with the fans of the city and make Austin a great destination to come and play.”

“All throughout the city, it’s definitely pretty exciting down here. You have people wearing the different FC jerseys, Bold jerseys. It seems to be excited. It seems to be an excitement around everything down here. In general, there seems to be a buzz around the city. So I think hopefully those two can coincide with each other and really make it a great place for the sport.”

He continued, “Lastly to all the fans in Austin: let’s eat barbecue, go on and hikes, watch a lot of soccer, and enjoy the city. We’ve got a beautiful city here and I think we can’t take that for granted.”

“So we appreciate all your support, all the love. Y’all motivate us and we’re excited to get going this year and to also give our efforts, our energy, and what we work for back to the city.”

When it comes to Texas BBQ, Sarkodie highly rates Franklin Barbecue in Austin. “I go with brisket, side of Texas toast, and some baked beans, hits the spot every time,” he said.

Before becoming a fixture in the Lonestar State, Sarkodie’s soccer journey began and flourished in the state of Ohio. A native of Dayton, Kofi played his college soccer at the University of Akron, an NCAA powerhouse. He was a star for the Zips and helped a team loaded with future professional players win the 2010 College Cup, earning College Cup Most Outstanding Defensive Player honors.

He added, “In terms of keeping up with some players, of course, I keep up with a lot of the guys. Just as an example, just the other day, Scott Caldwell (New England Revolution midfielder) and I were on a quick call. About two weeks ago I was back in Ohio and I was visiting the Barsons, Chad Barson (formerly of the Columbus Crew).”

“I’ve known Chad for a really long time and I think it was just two days prior to this I was on the line with (David) Meves (2013 MLS SuperDraft #3 overall pick) cracking jokes and the usual and just catching up and having a good time. So these three guys, I’ve known them since we were, I think, 14 or 15 years old. We went to residency together down in Florida and played together for a really long time. It’s pretty cool to see that the connections are still strong and even after all this time, we’ve known each other for almost 17 years, we still find time to connect and just have a good laugh.”

Now that he’s a decade removed from the beginning of his professional journey, what would he say to himself as a rookie? “I think I’d probably tell rookie Kofi that I’m proud of him,” he said. “He came into a challenging environment, stayed focused, and found a way through.”

He continued, “It’s interesting cause I very much still feel like I did when I turned pro. I am maybe expected to, or empowered to, help the younger generation and give back, which is great because I think that’s what the game should be about: giving back to the next generation.”

“I hope I can help anyone at the university level and the league at USL that’s coming up, that’s looking for some type of guidance or knowledge or anything like that. I’m here and will be happy to help anytime, so feel free to reach out.”

While he may be ten years into his career, apparently he’s kept a youthful energy. Sarkodie said, “On a side note, just a funny story, in terms of being a veteran. A lot of the younger guys, they thought I was 22 years old. They were like ‘Yeah, Kofi, you have really good energy with that. You’re like 22.’ I was like, that’s great guys. I really like you guys now, so keep telling me that. It’s been nice.”

When most athletes retire, they talk about how much they just miss those interactions with their teammates. Out of soccer for a couple of seasons, Kofi felt that, too. “I definitely missed the team environment,” he said. “I think the best part about it is for sure the banter, the endless cracking of jokes.”

“Even the other day, the guys had me get up and give a speech, and the whole time the coaches are trying to make fun of me, the guys are trying to make fun of me, everybody’s going after me. It’s just stuff like that, that makes it fun. Or for example, one of the players, one of the young guys, coach megged him in training and everyone every day is like, ahhh, you know, everyone’s just going after him. Just stuff like that, it makes a lot of fun.”

While they have fun off the pitch, Sarkodie and Bold FC are focused on a successful 2021 USL Championship season after missing the playoffs in 2020. “Realistically, the expectation for the guys this year is really just to continue to strengthen our mentality,” Sarkodie said. “We’re just trying to focus on one training, one match, one step at a time.

“The only thing I can really, really expect from the guys is to overcome any of our doubts because I think that’s what champions, real champions, have to do in the long run. We have our goals set internally and we’re going to continue to work hard to achieve those things externally.”

Sarkodie and Bold FC will kick off their on the road vs. New Mexico United on 5/15.