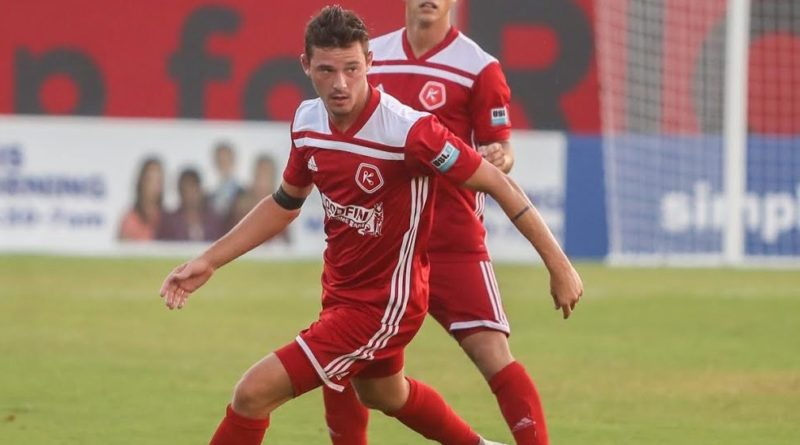 We begin our 10 questions series with the Richmond Kickers this year with the versatile attacking midfield (and sometimes right wing-back) Matt Bolduc.

The 2020 USL League One season just a little over a month away as the club begins a new era under head coach Darren Sawatzky. One of the key players returning this year is Matt Bolduc, who will be lining up in the Richmond Kickers colors for the fourth straight season. Matt joined the Kickers in 2017, but really broke out last season with six assists – best on the team and fourth-best in the league. We chatted with him to get his thoughts on last season, the 2020 campaign, his most under the radar teammate and much more.

1) What surprised you the most last season with the debut of USL League One?

MB: Two things surprised me, North Texas’ quality and Madison’s fans. Richmond Kickers’ supporters are obviously the best in the league but that’s nothing new.

MB: Attack. I’m a Defender when needed, Midfielder by trade and Attacker at heart.

MB: You could see me play anywhere along the midfield. We have proper quality and depth at the outside back positions this year.

4) Last season you tallied six assists, best on the team and fourth-best in the league, is that an area of your game you focus on or a matter of executing when placed in a particular role?

MB: I had assists from winger, outside back and the center of midfield last year. I’d like to think I have an eye for a pass, whether it comes off or not is another question. That’s why we train!

5) When you aren’t focused on playing, who are your favorite teams to support – soccer or in another sport?

MB: Chelsea is my team, I bleed blue. Outside of soccer though, I support my hometown teams ie. Patriots, Celtics, Red Sox & Bruins.

6) Which away ground are you most looking forward to visiting this season?

MB: Madison & Greenville. Greenville, simply because they’re the closest team to us geographically and the runners-up. We have to take 3 points from them. And Madison because they have great support but when you go out there and do your job as the away side, they’re not so loud anymore. Such a good feeling.

7) Give us an album or artist you’ve been enjoying in the past few years.

MB: I think Spotify had my #1 listened to artist this year as Drake which isn’t interesting at all but I like a few different genres of music. It depends on the day you ask me, so since it’s raining today [when answering], John Mayer. It’s a vibe.

8) Who on the current squad do you think is the most under the radar heading into the new season?

MB: I feel like I’m under the radar sometimes so if I was selfish I would say me. But to answer the question, Luke Pavone. He didn’t see the pitch a lot last season but he’s come into preseason with that Northerner’s chip on his shoulder and looks like he’s ready to prove himself this time around.

9) What is your favorite place that you’ve discovered so far in Richmond?

MB: If you want a really cool coffee shop, go to Crossroads Coffee & Ice Cream by Forest Hills Park. If you want the best sandwich you’ve ever had, go to Coppola’s Deli on Cary St.

10) The second game of the season is on the road at the newly formed New England Revolution II, not far from where you grew up – thoughts on returning to the area and the addition of this new club?

MB: I’m super excited to play a professional game of soccer in New England. Obviously I’m looking forward to having my friends and family come but my Dad hasn’t been able to travel and watch me play live since I signed my first contract in 2016. To have him in the stands finally able to see me play professionally in person is honestly going to be a dream come true for both of us. I can’t wait.